In the SILVER event also, the top 16 teams out of the 67 participating teams qualified for the last-16 stage after completion of 10 rounds of Swiss league. The team PRAYAS comprising of Kamlesh Gupta, Vikram Jain, Tapas Kumar Roy, Shantanu Ghosh, Tanmoy Majumder, sagar Bhuiya, Swapan Sardar & Amitava Ghosh took the top spot with a score of 135.87 VPs, followed by DR. SSMC team with a score of 134.60 VPs. The 3rd & 4th places were taken by TALLURI (132.27) & PRABHAV (130.29).

In the BRONZE event, the 9 participating teams finished their round-robin yesterday morning. The results were as follows: 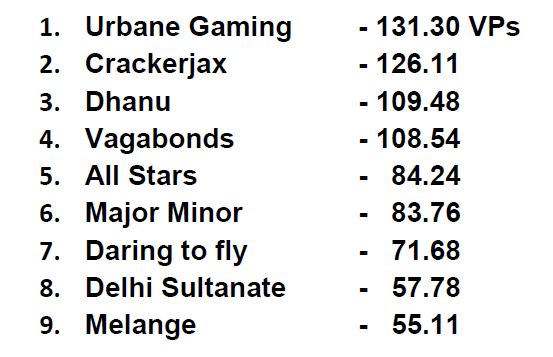 One important aspect of the Bronze event for beginners was the presence of young Nachiketa Muthuswamy playing with his mother Anjali Karthikeyan. The duo were playing in the Team Major Minor and finished 6th.

The qualified teams in the Gold & Silver events will play the Pre-QF matches (4 sessions of 10 boards each) today. The top 1 to 7 ranked teams in Swiss league had the option to choose their opponents from the teams ranked 9th to 16th. The line up of the PQFs based on the selection is as follows:

The kibitzers can watch the broadcast of the above matches on the website kibitz.realbridge.online. It will be a half an hour delayed broadcast to take care of the security of boards.

GOOD LUCK TO ALL THE TEAMS.